We lost two of our students to violence within one hour yesterday.

Trevon Dickson was killed by a fellow student. Ma’Khia Bryant was killed by the Columbus Police Department after she called them for assistance. Our thoughts are with their families, friends, and school communities.

What I saw on the news yesterday reminded me of so many incidents that I, and all CEA members, have witnessed in our schools and worked to deescalate as teachers. No dispute between children should result in death.

We call on our city leaders to take sweeping and transformational action that meets the urgency of these tragedies. Action to reduce gun violence, action to address economic inequality, and action to stop the deaths of our students and families at the hands of those sworn to protect them.

Two of our students were robbed of their futures. No more words. It’s time for action.

UNCF is the nation’s largest and most effective minority education organization. UNCF plays a critical role in enabling more than 60,000 students each year to attend college. We are ready to begin our Columbus City Schools’ UNCF Workplace Campaign. Fifty percent of every dollar we raise is designated for scholarships for Columbus City School students. Please be generous in your giving. Many of our students do not have the resources to consider higher education. Your donation is an investment in our children, our community, and our nation. This drive is very important, as we prepare our students for jobs in the global community. More than sixty percent of UNCF scholars are the first in their families to attend college and their successful education changes lives. Your investment can help break the cycle of poverty and despair in a family. The impact of your gift will be felt for generations to come. This year’s campaign is completely online. To donate, go to the UNCF’s secure website at http://bit.ly/2SJOE5J. Our UNCF Workplace Campaign ends on Mar. 31, 2021. “A mind is a terrible thing to waste.” 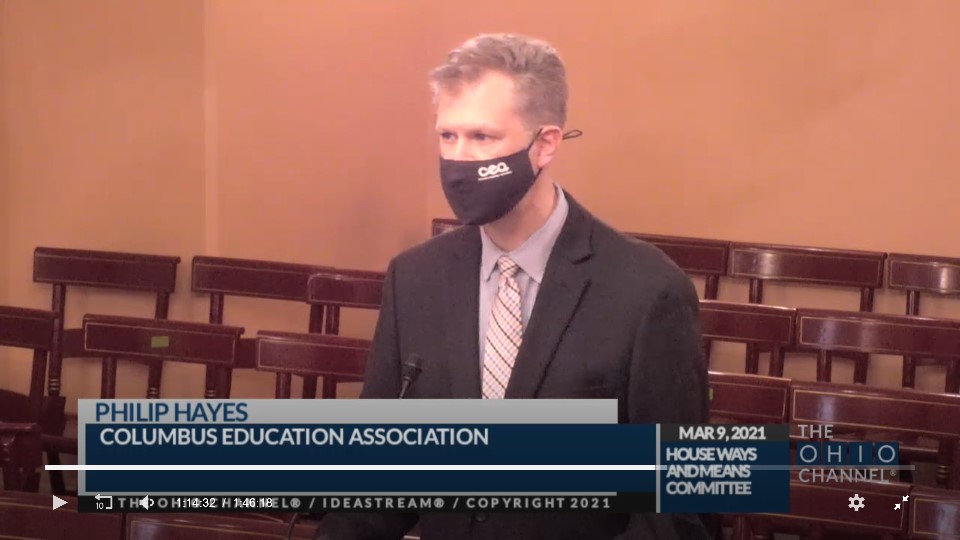 On March 9, 2021, CEA Vice President Phil Hayes testified in opposition to House Bill 123 in the Ohio House Ways and Means Committee. House Bill 123 would weaken school board oversight of tax abatements, remove the requirement for municipalities to compensate school districts for loss of revenue from certain tax abatements, and weaken reporting requirements. Click here to view the video of his testimony, beginning at the 1:13:20 mark. Vice President Hayes’ written testimony is below.

My name is Phil Hayes, and I serve the more than 4,000 members of the Columbus Education Association as their Vice President. I appreciate the ability to address you and the committee members as an individual regarding my opposition to House Bill 123.

Our concern is that our students deserve and get well-funded, properly staffed and maintained schools and the resources they need to succeed. We are concerned about ongoing massive tax abatements that shifts the school funding burden to individual taxpayers. We are concerned about meeting the needs of our students and are tired of seeing funds that could provide for those needs being drained off to the tax abatement.

One of the examples we have consistently used to show the impact of tax abatements was the 2018 CoverMyMeds CRA. This single abatement will result in an estimated loss of $55.6 million dollars in property tax revenue, while the estimated recovery of payroll tax revenue to the district was $11 million. This move across the river will cost the district and our students more than $44 million over the life of the abatement. To put that amount of foregone revenue in perspective, that $44 million dollars would more than cover the badly needed replacement of Columbus Alternative High School– costing approximately $40 million.

In the spring of 2019, a St. Louis-based developer came before the Columbus City School Board seeking approval for a 15-year, 100 percent tax abatement to develop the former Buckeye Steel site on the south side of Columbus. The developer, who reported more than $2 billion in revenue in 2017 showcased the $4.8 million in ‘estimated’ income tax sharing with the district and a ‘partnership’ which the developer values at approximately $253,000. What was not mentioned at all in the presentation was the total value of the abatement, reported by the Columbus Dispatch the next day at $8.9 million.

When I was in my junior year of college, studying to be a teacher, my mom clipped out an article from the Columbus Dispatch reporting the historic DeRolph decision declaring the school funding system in Ohio unconstitutional. On the article, she wrote “Now schools and school districts will have the money they need!” That was 24 years ago; school funding is still unconstitutional and still unfair. In the 2019 fiscal year, it is estimated that Columbus City Schools lost nearly $90 million dollars because we are on “the cap”.

This proposed legislation increases the percentage of a CRA commercial or industrial project that may be exempted from taxation without obtaining the approval of the board of the school district that encompasses the CRA from 50 percent to 75 percent. The LSC’s analysis says “This decrease would tend to make approval of tax exemption easier and might tend to increase tax revenue losses to school districts and other political subdivisions.” Less money for school districts who are still unconstitutionally funded.

House Bill 123 discontinues the requirement of compensation agreements of CRAs resulting in $1 million or more in municipal income tax from the income of new employees. The LSC’s analysis says “This change would tend to benefit municipal corporations and counties at the expense of school districts.” Less money for school districts who are still unconstitutionally funded.

This bill makes drastic changes to the reporting requirements. Currently, this report must include the result of any compliance review by TIRC and whether or not project has met hiring, retention, and payroll targets, whether the agreement has been rescinded, or whether TIRC recommends changes to the agreement.

According to the LSC’s revised analysis only “requires the reporting of such information only if those targets are part of an exemption agreement, and only if those targets were not met. Agreement rescissions and council recommendations are no longer required to be reported.” This lack of transparency is concerning, and will make it harder for the TIRCs to do their job.

Why then, is this legislation needed? In his co-sponsor testimony, Representative Frazier spoke of a “glaring need for CRA reform”. He cited “burdensome additional reporting requirements, limitations and unnecessary fees” that needed to be removed.

In his testimony, Representative Frazier said the goal of this legislation was to make “CRAs more accessible by removing redundant reporting mechanisms, adding consistency in annual filing requirements, reducing the restrictions for who may enter into CRA agreements, and removing fees for property owners entering into CRAs will attract investment in Ohio.”

For starters, the one-time CRA application is five pages long. Our kindergarten through third grade teachers complete a five page Reading Improvement and Monitoring Plan for each student and update it three times each year. Special Education teachers complete a 10 page Individualized Education Plan for each special needs student and update it anywhere between four to eight times per year. We know first-hand what redundant reporting requirements are— and the reporting requirements that HB 123 seeks to eliminate are anything but redundant.

Neither Representative Frazier nor his co-sponsor, Representative Cross in their sponsor testimonies or during the question and answer session conducted by the chair provided any kind of statistics or research that would support their position that there are obstacles preventing individuals, companies and corporations from entering into CRA agreements.

In 2020, the Franklin County Auditor’s Tax Investment Review Council Report (TIRC) contained some interesting statistics. Of the 4,021 CRA abated parcels within its boundaries, Franklin County and other municipalities experienced more than $100 million in foregone tax and $3.5 billion in total CRA abated value.

Judging from the statistics above, there don’t seem to be many obstacles to the creation of CRA agreements. This legislation would also remove a $750 application fee for a CRA tax incentive. So removing this $750 fee is going to make attract even more investment in Ohio?

This bill has had one individual, Nate Green, from Jobs Alliance offer proponent testimony on Wednesday, Mar. 3. Mr. Green did not provide any kind of statistics or research that supported the idea that removing “burdensome additional reporting requirements, limitations and unnecessary fees”
would attract investment in Ohio. He did, however, explain the most important provision in the bill in the question and answer session that followed.

“The biggest change is the 50 to 75 percent requirement for school board notifications,” he said. “That’s a big deal a lot of money they get, the process to get those abatements into place and get school board approval takes a lot of time and effort …(developers) don’t go through that in Indiana. It’s more formulaic, the developers understand it more and they don’t have to negotiate it. Ours is much more negotiated…these laws would streamline the process and make developers understand and companies understand.”

In summary, this law makes tax abatements less transparent, weakens the local authority of each one of Ohio’s school districts, makes it easier for companies and developers to push through tax abatements and benefits municipal corporations at the expense of local school districts—taking money from schools who are already underfunded and have been waiting 24 years for the system to be fixed. This bill is a solution to a problem that doesn’t exist, and will exacerbate the problems that do.
Chair Merrin, Vice Chair Riedel, Ranking Member Sobecki and members of House Ways and Means Committee, this concludes my testimony. I would be more than happy to answer any questions you might have.